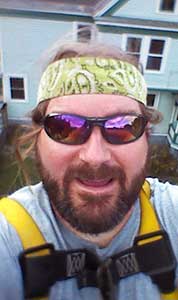 Ken has been involved in renewable energy for the last 16 years. Originally an Environmental Science student, he started working with biofuels in diesel vehicles back in 2001. Ken started working in the solar industry in 2005, first with off-grid solar and wind turbine systems. He started working with Kevin Bailey on his first project back in 2007, and he is currently the project manager at High Peaks Solar. Ken has been going to Haiti and Tanzania on solar volunteer trips annually since 2012, with TSINL and other non-profit organizations. He has played a role in system design, materials acquisition, project installation and system maintenance.