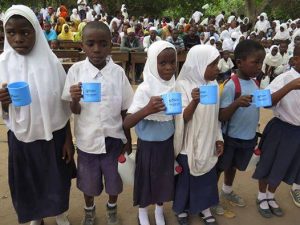 ARF will embark on building the first phase of building Wells for 2017.. ARF Founder Maryvonne Pool has confirmed that Drilling for Hope from Saratoga New York and The Sky Is Not Limited from Troy New York, have sponsored five more wells for the first phase 2017.
The Pine Hills Elementary School in Albany, has donated a new classroom for Mwongoza Primary School in Mkuranga District. All construction starts march 1st 2017.
The Wells projects has received a donation of 3000 waters cans for THE VILLAGE HEART Project from the Mohamed Punjani Foundation based in Toronto, Canada….The Sky is Not Liimied.,,,,,Mohamed Punjani… Drilling For Hope. Jean Dobbs…Kevin Bailey…Karen Flewelling…Deann Lynch